Discover the Joy Of Missing Out

JOY OF MISSING OUT is starlite verse on death and independence for the dreamers, dropouts, rebels and the neuroatypical. A confession and sublimation of breakdowns personal and systemic, JOMO paints a playful and unflinching portrait of the ups and downs of psychological struggle, city survival, and queer romance. Simultaneously it deploys online slang and high lyrical registers, morphs the sad girl into Baba Yaga, drops truth bombs on art and politics, and puts the sin into sincerity. Even as it engineers the death of its speaker, JOMO is a paradoxically joyous litany of her endurance and a boost-plea to stay in a messed-up world and say it out loud. This anthem is best read at night or dawn when no one's around for a Like or a kiss.

Ana Božičević invents a new language of 21st century displacement: a displacement that occurs not just in space and in time but in heart, vision and mind. The poems in Joy of Missing Out range from Croatian farm fields and embroidered dresses to life spent online, emoji, chain stores and drugs. Her casual poems are formidably informed and, also, great.

Auto-erotic (sunlit) pool life + "the funny softness at the deep end of the field" = Joy of Missing Out. Mid-ocean, is that sound of civilians being murdered, or is it Julie Andrews exclaiming in B minor on an Alpine piste? (Or meadow.) This book is full of switches. Pull the wrong one and there's no Europe. To put it another way, are there continents, cities and countrysides that, having left them, a person might never see again? Twenty-first Century 101: "Stupid pleasures" substitute in their entirety for a very real glacier, etc. I have loved Božičević's poetry for a long time, and it was a glamorous treat for me to be with it again. The extreme poetry that will never, precisely, return.

from Joy of Missing Out

Join Lauren Hunter & friends Thursday, May 18th in Brooklyn to celebrate the launch 🚀 of her first book HUMAN ACHIEVEMENTS 🏅 from Birds, LLC. 🍾

Readings will be followed by a dance party @ 9:30pm with 3 DJs spinning all vinyl: funk, soul & vintage Latin music

Lauren's book HUMAN ACHIEVEMENTS will be available at the launch party at a discounted price, and for more info and to order, go here.

For more info about Lauren, visit her author page.

Join Birds, LLC Monday, May 22nd at 7pm for the annual Brooklyn Independents reading series at the Brooklyn Public Library.

New Birds, LLC books will be available at the reading.

CHASE BERGGRUN is a trans poet. They are the author of R E D, forthcoming from Birds, LLC in 2017, and the chapbook Discontent and Its Civilizations: Poems of Erasure, published by jubilat in 2012. Their work has appeared in the PEN Poetry Series, Sixth Finch, Diagram, The Offing, Prelude, Apogee, No Tokens, Beloit Poetry Journal, and elsewhere. They received their MFA from New York University.

ANA BOŽIČEVIĆ, born in Croatia in 1977, is a poet, translator, teacher, and occasional singer. She is the author of Joy of Missing Out (Birds, LLC, 2017), the Lambda Award-winning Rise in the Fall (Birds, LLC, 2013) and Stars of the Night Commute (Tarpaulin Sky Press, 2009). She is the recipient of the 40 Under 40: The Future of Feminism award from Feminist Press, and the PEN American Center/NYSCA grant for translating It Was Easy to Set the Snow on Fire by Zvonko Karanović from Phoneme Media (2017). She is the editor of "Mysteries of Vision" by Diane di Prima published by Lost & Found: The CUNY Poetics Document Initiative.

LAUREN HUNTER is the author of HUMAN ACHIEVEMENTS (Birds, LLC 2017) and the chapbook My Own Fires (Brothel Books 2011). Her voice can be found inside the Poetry Jukebox in New York's East Village, on the experimental track AM Radio by Marselle, and in poems forthcoming from Jubilat and The Recluse. Lauren currently lives in her hometown of Durham, North Carolina.

SOMMER BROWNING is a poet, comedian and librarian based in Denver. Her poems have appeared in BOMB, Spork, Brooklyn Rail, and more. Her latest book of poetry is Backup Singers (Birds, LLC; 2014) and her most recent book is the collection of comics "Everything but Sex" by Low Frequency Press.

A heartfelt thanks to the Brooklyn Public Library for their support and for their dedication to supporting small independent presses, their authors, poetry and literacy!

We’re excited to announce the next title from Birds, LLC:

Chase Berggrun is a trans poet. They are the author of R E D, forthcoming from Birds, LLC in 2017, and the chapbook Discontent and Its Civilizations: Poems of Erasure, published by jubilat in 2012. Their work has appeared in the PEN Poetry Series, Diagram, The Offing, Prelude, inter|rupture, Apogee, Beloit Poetry Journal, and elsewhere. They received their MFA from New York University. 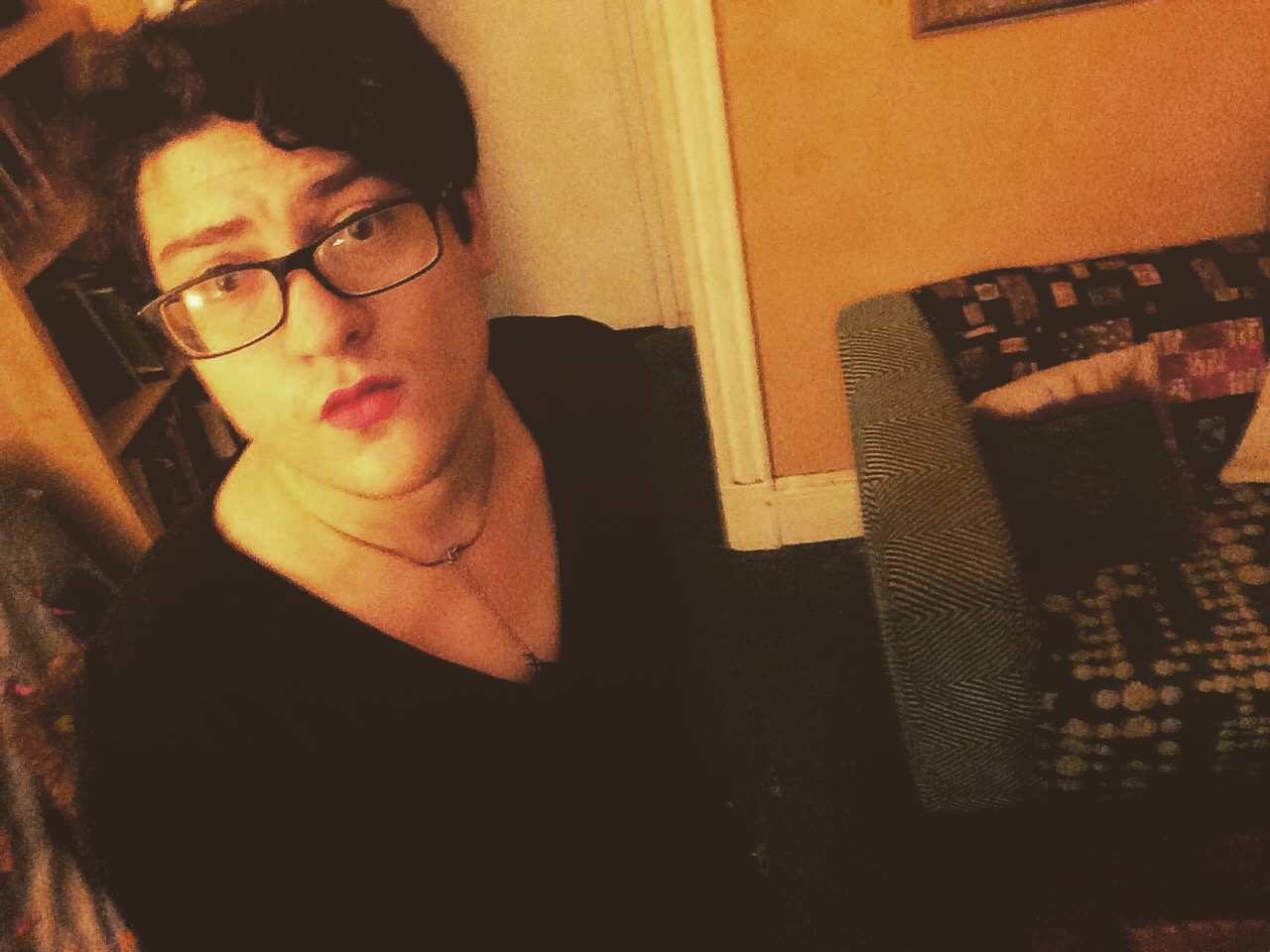 “I tried to undress a mystery,” testifies the speaker of R E D as this haunting literary performance—somewhere between neo-Gothic burlesque and formal experiment in queer auto-theory—begins. Erasing Bram Stoker’s Dracula all the way down to its psychoanalytic minimalia, Chase Berggrun unearths a narrative not only of gender transition, but of the uncanny political and metaphysical transitions entailed by the metamorphosis of individual into chorus as well. By the end of this adventure in appropriation as self-disclosure, we learn that the “mystery” was self all along: “A detail in a pool of blood / the body gathered in an awkward kink / I dress myself in easy anything.” Rapt and unsettled, we readers find ourselves, too, both saturated and implicated in the sanguinary affair of desire, “drenched to a scarlet with want.”—Srikanth Reddy

Pre-Order Human Achievements or purchase any other Birds, LLC title from our website until January 2017 and we will donate 50% of all book sales to the Sacred Stone Legal Defense Fund, providing legal support services for those involved in direct action against the Dakota Access pipeline.

The Intimately Epic Poem We Need: On ‘IRL’ by Tommy Pico (The Millions)

18 Books You Should Read This September (LitHub)

It’s OK for a Poem to be Funny: An Interview with Tommy Pico (LitHub)

Tommy Pico's IRL Is Better Than the Internet (The Stranger)

The Most Anticipated Books of Fall 2016 (Publisher's Weekly)

IRL is a sweaty, summertime poem

If you ordered during our pre-sale (thank you), your copy has shipped.

Be sure to catch Tommy on his current West Coast Tour:

Get your copy of IRL now

Tommy “Teebs” Pico is the author IRL (Birds LLC, 2016) and the zine series Hey, Teebs. He was a Queer/Art/Mentors inaugural fellow, 2013 Lambda Literary fellow in poetry, and has poems in BOMB, Guernica, and the Offing. Originally from the Viejas Indian reservation of the Kumeyaay nation, he now lives in Brooklyn and with Morgan Parker co-curates the reading series Poets With Attitude (PWA). @heyteebs

Ana Božičević was born in Croatia and then she came to NYC. She's the author of Stars of the Night Commute and from Birds, LLC, Rise in the Fall, winner of the Lambda Literary Award. Her new book, Joy of Missing Out, is coming out from Birds, LLC later this year. She works and teaches poetry at BHQFU. She also sings.

Niina Pollari is a writer, Finnish translator, and erstwhile Floridian. Her first book DEAD HORSE came out from Birds, LLC in 2015.

Monica McClure is a writer and performer based in New York. She is the author of Tender Data (Birds LLC, 2015) and chapbooks Mala (Poor Claudia, 2014) and Mood Swing (Snacks Press, 2013).

We're excited to announce the next 4 titles from Birds, LLC:

Joy of Missing Out, by Ana Božičević

The Agnes Book, by Guy Pettit

Tommy "Teebs" Pico was a Queer/Art/Mentors inaugural fellow, 2013 Lambda Literary fellow in poetry, and has poems in BOMB, Guernica, and the Offing. Originally from the Viejas Indian reservation of the Kumeyaay nation, he now lives in Brooklyn and with Morgan Parkerco-curates the reading series Poets With Attitude (PWA). @heyteebs

Read some of Tommy's work here.

Lauren Hunter is a poet & editor living in Durham, North Carolina. She received her MFA in poetry from The New School and works with the team at Telephone Books as their Managing Editor. Lauren is the co-founder/curator of Electric Pumas, a reading series/revolution in New York City. Her chapbook, My Own Fires, was released by Brothel Books in 2011, and recent poems can be found in Wreck Park and Poetry Crush. She can be tracked on the internet as breakfast_etc.

Read some of Lauren's work here.

Ana Božičević was born in Croatia and then she came to NYC. She's the author of Stars of the Night Commute and Rise in the Fall, winner of the Lambda Literary Award. She works and teaches poetry at BHQFU. She also sings.

Read some of Ana's work here.

Guy Pettit lives in Providence, RI. He is the author of My Life's Work (Mindmade 2013) and Love Me or Love Me NO1 (minutes 2011). Recent poems have been published in DivineMagnet & Gulf Coast. He publishes occasionally as Flying Object and helps out at Factory Hollow Press and jubilat.

Read some of Guy's work here.